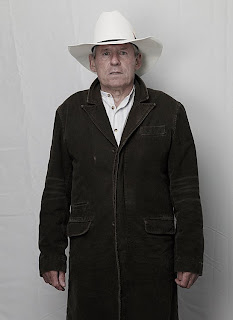 The West Midlands Bi Annual Art Prize has been won by midlands based advertising photographer, Lorentz Gullachsen.
Gullachsen say’s "I was aware that I had two images selected for the exhibition and that was great, but to have won was a great shock. There was some wonderful paintings, fine art illustrations and sculpture in the show. I was honoured just to be selected’"

The image is of an Attendee at the Wolstock festival and part of a personal project, ‘In the American West Midlands’ which was shot in a portable studio over a weekend in Wolverhampton.

Lorentz say's "the last year has been tough for all in advertising and so I have taken the opportunity to do a part time MA at Birmingham City University. It is having a positive effect on my work and I feel I am going to be better equipped for the upturn".