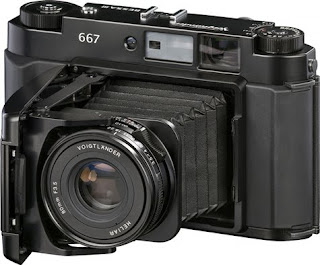 It cheered me up to see that Fujifilm are launching a new medium format film camera this spring. We are not sure when it will sell in the UK as yet.

First shown as a prototype at the Photokina trade show in Cologne last year, the GF670 Professional will now be released in Japan in mid-March as a portable folding bellows camera, jointly developed by Fujifilm and Cosina. The production may be limited to just 5000 units.

Its most unusual feature is a mechanism for switching between two different film formats - 6x7cm and 6x6cm. It is also fitted with an 80mm f/3.5 fixed focal length lens, which is composed of six glass elements in four groups. The GF670 has an automatic lens shutter, and an SPD sensor with both automatic and manual autofocus. The ISO sensitivity ranges from 25 to 3200.
Posted by Kevin at 16:15 No comments: 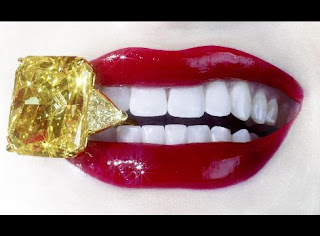 Spot the Fake #1" by Miles Aldridge
Review by Linda Yablonsky

Feb. 2 (Bloomberg) -- Most men in suits don’t look like sex symbols. Gary Cooper did, at least in Edward Steichen’s come- hither 1930 photograph of the actor for Vogue.

In those days, a fashion magazine was the go-to place for seduction by portraiture, publishing the most provocative photographers, writers and designers of the moment.

Today, a style magazine is literally a museum piece at New York’s International Center of Photography. Proclaiming 2009 as its Year of Fashion, ICP is presenting four separate but unequal exhibitions that propose fashion photography as a crucible for new ideas in art.

To accomplish this, the ICP, which prides itself on classic photojournalism, has taken a radical step. Its lead show, “Weird Beauty: Fashion Photography Now,” pretty much dispenses with photographic prints. Those it does show are nearly lost within a blizzard of magazine layouts, and not even original ones at that. All are reproductions, most published within the past two years.

This picture is surrounded by Aldridge images from recent magazines, some featuring languid young men sleeping under bushes. Their clothing is secondary to their presentation as objects of desire themselves.

That is what is most striking about the images in this show: Clothes are not the center of attention. The artifice of the image itself is what takes center stage -- the dramatic lighting, framing, styling and posing that combine to brand the style of each of the show’s 40 photographers rather than any designer of fashion.

From Nick Knight we get an overhead, black-and-white shot of a model in a laced-string camisole laid out on an examination table as if begging to be ravished. Paolo Roversi’s “Blue Mask” surrounds the model’s face behind the blow-up of another Roversi photograph of her tinted blue face, with a fake pink mouth attached.

Removed from their commercial context, it might be easier to consider these images as ingenious works of art. But we see them here only in the service of commerce, to sell a label or a concept, not to create any larger understanding of the human condition.

Steichen, who mined the Romantic tradition of the sublime before becoming a hard-core modernist, was one of the stars of the Conde Nast firmament in the salad days of Vogue and Vanity Fair, from 1923 to 1937.

His work for those magazines is the subject of a retrospective at the ICP, with 175 photographs of socialites and celebrities who ruled the gossip columns of the day.

It’s interesting to move from the abject surrealism of “Weird Beauty” to the pronounced glamour of Steichen, who established the photography department at New York’s Museum of Modern Art. His formal iconography of famous figures like Winston Churchill, Amelia Earhart, Charlie Chaplin, Greta Garbo and Cooper has influenced contemporary photographers as disparate as Robert Mapplethorpe and Irving Penn.

Two smaller shows force a closer consideration of the artistry behind a fashion photograph. “Munkacsi’s Lost Archive” presents a small selection of new prints from a cache of glass negatives by the Hungarian photographer, acquired by the ICP after they appeared on EBay.

Before he died in 1963, Martin Munkacsi was a top talent at Harper’s Bazaar whose art took place as much in his darkroom as on a set. The show reveals his process, juxtaposing original shots that include an assistant’s hands or feet in the frame with the tight focus of a cropped, finished print.

More absorbing -- and curious -- is “This Is Not a Fashion Photograph,” a group of unrelated photographs from ICP’s collections that curator Vince Aletti cites as having as much calculated style as documentary truth.

It would be difficult to find a more fashionable image than George Strock’s 1941 photograph of the very stylish baseball great Satchel Paige, who lights a cigarette at a Harlem pool hall.

It has personality, it has social realism, it has class. Which means it may not matter if we label it art, journalism or fashion. At the ICP, such distinctions are completely without a difference.

“Weird Beauty: Fashion Photography Now,” “Edward Steichen: In High Fashion, The Conde Nast Years, 1923-1937,” “This is Not a Fashion Photograph: Selections from the ICP Collection” and “Munkacsi’s Lost Archive” are on view through May 3 at the International Center of Photography, 1133 Avenue of Americas at West 43rd St. Information: +1-212-857-0045; http://www.icp.org.

( Linda Yablonsky is an art critic for Bloomberg News. The opinions expressed are her own.)

To contact the writer of this review: Linda Yablonsky in New York at fabyab@earthlink.net.

"Spot the Fake #1" by Miles Aldridge, a 2006 photograph published in New York Times T Magazine, is shown here. The photo will be on display as part of the exhibit "Weird Beauty: Fashion Photography Now" at New York's International Center of Photography through May 3, 2009. Photographer: Miles Aldridge/ICP via Bloomberg News