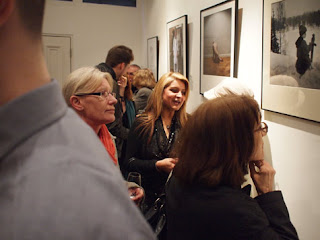 LET’S FACE IT 6
The Picture-Perfect Portraiture Exhibition at the 2010 LPA Awards
A throng of admirers of commercial and fine-art photography celebrated some world class portraiture at the ‘Let’s Face It 6’ exhibition by the London Photographic Association on 31st March.

They packed the Assembly Rooms gallery space in Soho, London’s quintessential media-and-entertainment district, to honour winners of the 2010 LPA Awards at the sixth edition of the annual competition.

The winners of the single category are:

Also commended were the excellent portraits by another 14 entrants. And the LPA would also like to highlight the participation of another 14 finalists.

Portraits by the winners and commended photographers were on display at the Assembly Rooms exhibition on 31st March. At the same event, attendees were also treated to the complete series submitted by the winners and the commended contestants via a slide show on a large screen.

The exhibition at the Assembly Rooms continues until 29th May.

An online gallery of the winners, the commended and the finalists’ portraits, plus exclusive interviews with the Gold, Silver and Bronze victors, can be accessed on the LPA website. Click here.

• YOUR OWN PERSONAL COPY OF THE EXHIBITION

A premium-quality catalogue featuring the complete entries submitted by the winners, the commended entrants and the finalists was kindly sponsored by Blurb, the international online book publisher. Each exhibiting photographer and the award’s judges will receive a free copy.

You can also purchase your own, for the non-profit price of £29.95 each, directly from Blurb’s website.

“The LPA's raison d’être is to assist photographers to market themselves by gaining awareness in a very crowded marketplace. And running regular competitions is a great way of doing this,” says Kevin O’Connor, the LPA’s founder and the exhibition’s curator.

“The competitions give us the opportunity to show off the winners and their works through our numerous outlets: online galleries, published interviews, exhibition displays, and published catalogues.

“We then network this information through our social-networking platforms (including Facebook and Twitter) so that most of the planet will get to know our photographers’ output; it doesn’t get much cooler than this.”

• GUESTS AT THE LPA AWARDS

The full-house exhibition on 31 March was attended by a host of LPA members and supporters, including established photographers, new talent, photographers’ agents, image buyers from the BBC, The Times newspaper and stock-photography giant Corbis, and journalists.

Moreover, an interactive element was added as a TV-production crew followed LPA member Richard Bradbury, who was being filmed for a programme about his very special book project to raise money for Great Ormond Street Hospital called The Children Of London 2010.

The LPA would like to thank Laura Goode and Hop House Design + Advertising for the catalogue’s exceptional design.

It is so exceptional, the only two proof copies brought to the Assembly Rooms exhibition rather inconveniently disappeared.

We would like to emphasise to anyone who has seen them that they were there for display-only purposes.

Call for entry for the Let’s Face It 7 exhibition and 2011 awards kicks off in September. More details to follow shortly.