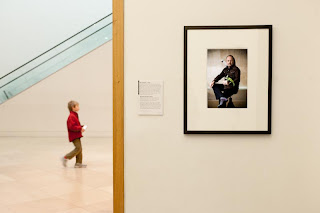 LPA member Suki Parnell's picture of Bill Bailey (above) is the Photograph of the Month at the National Portrait Gallery and will be on view from 4th January in the People of Today section on the ground floor.

Comedian, musician, actor. Bill Bailey’s solo comedy career started in 1995, with Cosmic Jam which earned him a Perrier award nomination at The Edinburgh Fringe Festival. He has toured internationally with Bewilderness (2001) and Part Troll (2003). Bailey is best known for his TV work in the series Black Books (2000–2004) and Never Mind the Buzzcocks. In December 2009 Bailey’s Remarkable Guide to the Orchestra toured nationwide including a performance at The O2 arena, London.

Sukey Parnell graduated with an MA in Photography from Thames Valley University in 2007. Since then, her editorial commissions have included work for the Independent on Sunday, Sunday Magazine and Radio Times. Parnell was a finalist in the 2006 and 2007 National Portrait Gallery Photographic Portrait Prize.
Posted by Kevin at 16:11