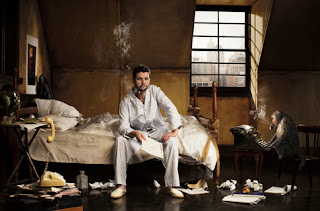 "Doolan likes the Infinite Monkey Theorem, which suggests that monkeys randomly banging on typewriters for an infinite amount of time would eventually produce the works of Shakespeare," she said. "In this photograph, the same idea is applied for the Australian film industry – which meant only one monkey was afforded and at mates' rates!"

Alina is a film stills and portrait photographer concentrating on photographing people in the arts. She took this image for the purpose of creating something she already had in her mind, but feels this encompasses the image to be entered into portraiture competitions. "I enjoy the calibre of entries of the Let’s Face It competition," she told us.
Although both of Alina's parents were photographers, she preferred history, literature, maths and biology and never did anything creative at school. In fact, she had her heart set on a career in law and got a degree in finance and law, working for Price Waterhouse Coopers in the tax division. "Of course, a few years later, I got terribly depressed about this job and the lifestyle and discovered that what I really want to do is film," she said. ".So I went back to Uni, did a post-graduate diploma in Film Production followed by numerous short courses at the Australian Film School and Photography School and eventually started working on film sets as a film stills photographer. I started taking pictures of people I worked with on film sets: actors, directors, cinematographers, producers, costume designers and so on.

"What interests me is the story telling and therefore many of my images are rather constructed, reminiscent of film set. I like utilising the set and costume design as part of the message. I equally love the timeless essence of simple black and white portraits, with no props, no set design, just the person and their personality."
Alina told us about one editorial commission which stands out in her memory. "Last year, I photographed iconic Australian actor Bryan Brown for a magazine. We could not really get through to him so it was hard to gauge which look and set up he would agree to. He arrived on set sick with the flu and not in the best of spirits. I had prepared six different looks: each had a story behind it and its own set of props. Bryan stood there with his arms crossed, dismissing every story and prop fairly quickly and boldly.  Inside I was losing it, but my crew told me that I appeared calm and in control!

"The last prop was a laundry basket with bed linen. Bryan’s face lit up: he uncrossed his arms and he said: “This could work”. I said to him, “well, I got this because from what I read up on you, you are a family man, dedicated to your wife and children...” He said that was true, but revealed that for many years as a young unknown actor he had to do his own laundry on film sets, and that his Mother was a cleaner. "This prop is perfect," he declared. I knew I was going to photograph Bryan in black and white, and I had the laundry basket painted in black and white stripes.
"In the end  instead of the 20 min I was supposed to have with Bryan, we shot for an hour. He was only too happy to keep on shooting. We ended up with a wonderful collection of images and he sent me two complimentary tickets to the play in which he was the lead. I look back and think: what if Bryan would not have liked any of the props?

Shooting celebrities could be overwhelming if you let it be. But if you don’t, it can be a wonderful experience."
Alina is now branching out into editorial work, and her goals are to shoot for magazines such as Vanity Fair, Interview, An Other Magazine, GQ, The Times and similar publications. She is directing a music clip and a short film, and shooting a number of portrait sessions with various actors as a personal project. "I am excited about all those, but of course I need to continue to generate paid commissions to fund the personal projects," she said. "So I am actively seeking commissioned work."