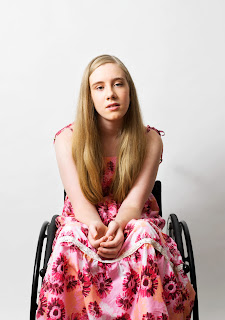 David Knight’s work included in exhibition at The British National Portrait Gallery for 3rd year running
David's work has for the 3rd year running been accepted for the  Taylor Wessing Prize. This year David is one of the 5 short-listed finalists. The winner will be announced on 8th November.

David Knight was born in Oxford in 1971 and currently lives in Australia with his wife and twin boys. His portrait of 15-year-old Andie Poetschka, was commissioned by Loud for the Cerebral Palsy Alliance to raise awareness of the condition throughout Australia. Knight says ‘I wanted the portraits to be positive and to convey the kids in an uplifting way.

You don’t immediately notice Andie is in a wheelchair; you just see a beautiful young woman. The image doesn’t demand you look at it, but gently draws you in.’ This is the third year running that Knight’s work has been included in the exhibition and this is his first time on the shortlist. He began his career assisting advertising photographers in London and Oxford before working before working in Dubai on a broad range of assignments across the region. He currently works in Sydney for advertising clients but manages to devote time also to portraiture and people-orientated assignments.

The Sydney photographer David Knight has made the shortlist for the Taylor Wessing Photographic Portrait Prize, run by the Bristish National Portrait Gallery. Knight will compete with four other entries for the £12, 000.00 ($18, 270.00) prize.  His photograph, Andie, pictured, shows 15 year old Andie Poetschka and was commissioned by Loud agency for the Cerebral Palsy Alliance. “You don’t immediately notice Andie is in a wheelchair; you just see a beautiful young women” Knight says.

The judges received 6000 submissions from 2506 photographer. The winner will be announced on November 8th and Knight’s work will be among 60 portraits on exhibition from November 10.

David Knight is a member of the London Photographic Association
Posted by Kevin at 17:32