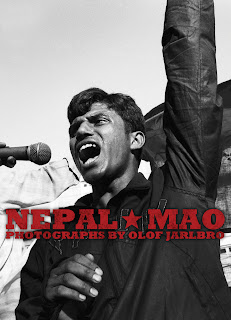 ”Underneath the chaos and political standpoint Jarlbro photographs doesn’t reveal the soldier instead the person behind the uniform.”
The book ”Nepal & Mao” takes us to a country in which peace was declared many years ago. But somehow there is still tension in the country. Old royalist that won’t step down from army posts, constant strikes and protests in the capital. Some regions with ethnic majorities have started to question the Maoist and Nepal’s control and to strive after their own state and independence. In Jarlbro’s third book about Nepal, he travels across the country in buses and off-road vehicles meeting Maoists at their camps in the jungle and up in mountain, following the tensions throughout the country, visiting communist rally and riots. Underneath the chaos and political standpoint, Jarlbro photographs do not reveal the soldier but the person behind the uniform.
Olof Jarlbro was born in 1978 in the town of Helsingborg, in the south of Sweden. He took up photography at the age of twenty and soon decided that he wanted to become a photographer. At the age of 22, he left Sweden and went to New York to study at the International Center of Photography, and a couple of years later he moved to Prague to study at FAMU - The Academy of Performing Arts in Prague.  He is the author of the critically acclaimed books, “The Fallen Kingdom” and the “ Stonefactory”. He is currently living in Sofia, Bulgaria working as a freelancer on longer reportages and photographic projects.
Nepal & Mao.  Photographs and text by Olof Jarlbro.  Rough Dog Press, 2011. 149 pp., 78 black & white illustrations, 15×21 cm. Duetone, Hardcover.
Posted by Kevin at 19:09