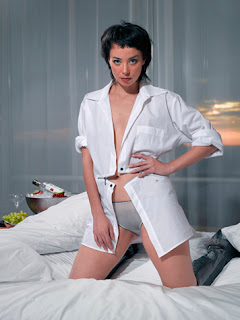 A titillating photo series in confusing times
In a Holland that seems to be at political boiling point and from within an art world that doubts its own identity, upcoming artist Daan Samson and renowned photographer Jeronimus van Pelt felt the need to surround themselves with only their most vigorous fellow art world inhabitants. In collaboration with the illustrious art gallery TORCH they present a photo series of the most delectable babes in the contemporary field of art. Eight female curators, theorists, artists, critics, museum directors and other art related women have agreed to be portrayed as sexual beings.

The woman as an inspiring muse is a recurrent theme in Western art history. Welfare artist Daan Samson invited photographer Jeronimus van Pelt to explore and interpret this timeless fascination together with him. What followed was a probing search for the female beauties within the contemporary field of art. At exhibition openings and art do's they approached only the most ravishing art professionals. Likewise, on social network sites like Facebook only the cutest art hotties were invited to pose as objects of desire.

Thanks to the technically immaculately prepared photo shoots by Jeronimus van Pelt  and the inspired styling by fashion guru Margreeth Olsthoorn the participating art women were presented with a setting in which they could break out of their culturally defined corsets. Freed from intellectual representational expectations these eight trendsetting Art Babes revealed themselves to be alluring sex kittens, captured in seductive centrefold poses as if they were experienced models. These ladies evidently feel at home in the carefully arranged ambiance of five-star hotels, fine wines, tastefully decorated lofts and the couture of internationally acknowledged designers.

The Art Babes project is a highly sophisticated comment on both the security and insecurity of our day and age, thus confronting the current art field with its own vanity by holding up an exquisitely designed mirror. The artist and the photographer themselves also flirt quite openly with notions of success and social prestige as this project questions existing structures, and does so with much bravura. As if they intend to approach one of the main sponsors of Art Rotterdam, one of the Art Babes was photographed in the shiny new illy corner of a Dutch art museum.