"You're Practically A Man" 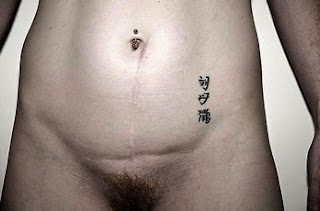 "You're Practically A Man" is a personal essay about identity. The scars are from Abdominal Myomectomy, Uterine Fibroid Embolization (unseen) and Partial Hysterectomy, and represent the efforts I went through to try and keep my womb. I lost that fight to a fibroid the size of a six-month pregnancy. The fibroid weighed down on my bladder and I was lucky to get one hour of unbroken sleep at a time. I couldn’t go out anywhere because I constantly needed the bathroom. And once a month, during my period, I would bleed non-stop for two days and lose so much blood that I was too weak to stand. Hysterectomy was the final option.

The title of the essay refers to a woman’s comment made to me after I told her about my operations and represents the consequential view from some people that women are not whole unless they have children. A male friend of mine also commented that my hysterectomy was no big deal because I am a gay woman and gay women don't have children."

Ginger Liu is a graduate of London’s University of Westminster with a BA (Hons) in Contemporary Media Practice (Photography, Film, Multi-Media). Her work has been published in the UK and USA, and has appeared on MTV. She is a Hollywood based photographer, writer and publicist.

drkrm. gallery is an exhibition space dedicated to fine art and documentary photography, cutting edge and alternative photographic processes and the display and survey of popular cultural images.

drkrm. was founded by John Matkowsky who has a twenty-five year reputation as a fine art black and white printer in Los Angeles. Mentored by Tom Consilvio, the founder of Silver Lab, John learned the finesse of the fine artistic print while working on the images of Gary Winograd, William Claxton, Lou Stoumen. and many other renowned photographers.
Posted by Kevin at 12:20