THE EYE OF A HAWK AND A VELVET GLOVE 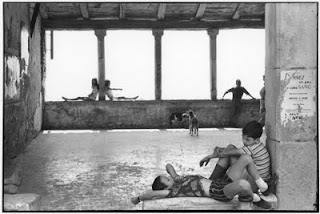 If you want a treat, get along to the Musee d’Art Moderne de la Ville de Paris before the 13th of September – and, thanks to Eurostar, you can now hop on a train at London’s shiny new St. Pancras station and be in the centre of Paris in less than two and a half hours.

This exhibition was first shown at the University of Fribourg-Misericorde, during the Triennial of Photography in 1975, under the title, Hommage a Cartier-Bresson, and comprises some sixty-eight photographs, chosen then by Cartier-Bresson himself as what he considered his best work. As this was the year that he had decided to give up photography to concentrate on drawing, it can be seen as a definitive exhibition of his entire photographic career.

In fact, they’re breathtaking. It’s easy to see why HCB, as he is fondly referred to by the French, is regarded as the father of contemporary photojournalism. Not just the father, but the master. His photographs are so simple yet so powerful that you stand gazing at them for a very long time indeed, reading the human stories that they tell.
And in these days of digital wizardry, it’s hard to believe that Cartier Bresson’s prints weren’t even cropped. His Simiane-la-Rotonde, France 1969, is so perfectly composed that it looks choreographed, set up, planned. But,no. HCB hated manufactured photographs - or any kind of technical intervention. He photographed life as it is. Armed with just a simple 35mm camera, his skill was his eye – and timing.

“For me, the camera is a sketch book, an instrument of intuition and spontaneity, the master of the instant……In photography the smallest thing can be a great subject. The little human detail can become a leitmotif.”

And it was in recognizing – and capturing – the human detail that has the power to tell the wider story that he showed true genius, such as in Visit de De Gaulle, Rovergne, 1961, where we don’t see the man himself: just the cynical expressions on the faces of elderly spectators. In Lorraine, 1972, we see lines of washing hanging out in the shadow of a filthy power station, but it’s the presence of a small child in the picture that makes it powerful and shocking.

There’s humour here too, such as in his photograph of a priest and elderly lady trudging along, oblivious to the two dogs mating in the background; and happiness, in Epire, Greece, 1961 – a simple picture of a boy doing a handstand in the hills, bursting with joi de vivre!

There are twelve portraits in this exhibition and, in each one, without the use of any artifice and using only available light, Cartier-Bresson captures wonderfully the essence of the sitter’s personality.

“We must respect the atmosphere which surrounds the human being and integrate into the portrait the individual’s habitat.”

And that’s exactly what he did. I particularly loved his portrait of Pierre Bonnard at home in his studio, looking tiny and vulnerable, with drawings and sketches strewn around; of Truman Capote, taken in Louisiana in 1946, surrounded by huge foliage, giving him a hunted look; and of Alberto Giacometti, taken on the rue d’Alesia in Paris in 1961, trudging across the road in the rain, with his coat over his head.

Cartier-Bresson loved taking photographs, documenting life: it excited him. In his book, The Decisive Moment, he recalls how, after getting his first camera, he “prowled the streets all day, feeling very strung up and ready to pounce, determined to trap life, to preserve life in the act of living.”

Ready to pounce he may have been, but he was never intrusive or voyeuristic. Whether they are portraits of famous artists or documents of daily life; whether they show tragedy and suffering or joy and humour, one quality is evident in all his photographs and that is the dignity and respect he affords his subjects. He knew that ‘trapping life’ carries with it a great responsibility and believed that a sense of human dignity was therefore an essential quality for any photojournalist.

“Of all the means of expression, photography is the only one that fixes forever the precise and transitory instant…..it is essential, therefore, to approach the subject on tiptoe…..a velvet hand, a hawk’s eye: these we should all have.”

This exhibition shows Cartier-Bresson at his best: documenting his times and capturing the timeless essence of human life. Go and see it if you can.

Eurostar operates up to 19 daily services from London St.Pancras International to Paris. Fastest London-Paris journey time is 2hrs 15mins
Return fares from £59
Single fares from £35
Trains also depart from Ebbsfleet International (close to junction 2 of the M25 and the Bluewater shopping centre, with car parking, taxi and Avis car hire facilities) and from Ashford International.