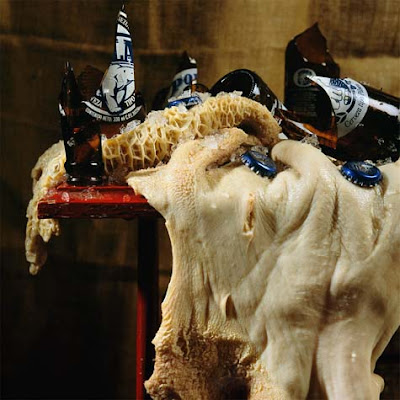 Carolina's Still Life series is an ongoing project which she has been working on since 2005. Of the winning images, she says: "Initially, my use of the still life came about as a formal exercise in photography. In August 2003 I participated in a "Photographic Cloister" (Claustro Fotográfico) consisting of a group of people spending five consecutive days and nights at the premises of a photography school in Caracas (ONG - Taller de Fotografía Nelson Garrido) to develop independent photography work. My readings into the genre in classical painting, as well as the images created at this intense workshop, set the platform to later define it as one of my main art projects.

"Wanting to incorporate objects and traditional Venezuelan foods as carriers of meaning beyond their function, I have been exploring themes of social and cultural decay. For me, the still life enables me to express urgent preoccupations with my country's present circumstances. However, my intention and purpose for these images is not to offer a clear road for interpretation. I am very interested in contradiction, ambiguity and the creation of personal metaphors to interpret an image."

Carolina's main interests centre around her sense of place as a Venezuelan while being curious about other cultures. She has spent much of her life living abroad. Her background in graphic design and art direction in advertising has meant that photography has always been an important part of her profession. Going to a photographer's studio was always "a thrill and the icing on the cake with any graphics job," she says.

Whilst still working in advertising in 2002, Carolina started to take photographic courses as a way of self-expression. Years later, she redefined herself as an artist and made a career change into commercial photography to support her art projects. She is about to begin teaching a photography course as a professor's assistant. Her immediate goal is to continue to strengthen her commercial photography skills and experience, while also focusing on her photographic fine art: "Specifically, newer fine art projects include a multidisciplinary work about Venezuela's 1999 mud slide, which involves photographing objects and landscapes, creating photograms and the use of cartography. Another project is photographing some neighbourhoods of Caracas, showing the frantic and chaotic architectural changes they are subjected to. My still lifes will continue as an ongoing project and in the future I wish to publish them into a book."

Carolina explains more about her work: "For my fine art photography I use medium format film so I am not limited in the final output of my images; however, I have also used digital point and shoot cameras and images exposed directly to photographic paper. Basically, I think any type of camera is good as along as the photograph reflects an honest approach to image making."

Carolina's Still Life series has been exhibited in Venezuela and México and is part of a few private collections. Entering the LPA competition was, she says, a step forward to exposing it to a wider audience.

"This is the first time I have entered an LPA competition and I did so out of sheer curiosity to expose my work. After receiving the notice that I was given the Gold Award for my series I was very surprised and of course thrilled at such unexpected recognition! For me, awards and competitions are a way to promote one's work in wider circles, for future publication, exhibits and commissions."