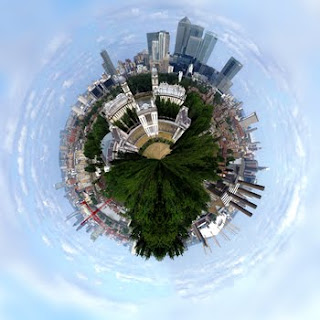 LPA Urbanscape Single Image Winner
Nick Alcock had been working on his ‘World' series for some time (and had already entered a completely different kind of image in our Landscape competition, which was commended). "I suddenly realised this 'World' picture fitted the category of Urbanscape perfectly," he says. " You can’t get more of an urban landscape than an image of London, after all. So, I decided to enter it."

The winning image from our Urbanscape single entry competition was taken from the Royal Observatory at Greenwich. "My daughter has recently moved to the town," explains Nick, "and I've become fascinated with the visual vibrancy of the area. The viewpoint I shot from provides a really iconic image of London. You can see everything from the Dome, Canary Wharf and the new Olympic Stadium right across to, and beyond, the Gherkin building."

Nick starts his ‘World’ images by shooting a big panorama (this one was a 12 part stitch). He feels it's important to get this technically and visually as good as possibly. "It’s impossible to make a satisfactory ‘World’ picture without having a sound image to work from," he says. He then spends vast amounts of time in Photoshop producing the final image. "There are literally dozens of visual decisions to make," he says. "There are things you have to leave and come back to the next day with a fresh eye. Sometimes nothing fits and I have to cheat, but my cheats have to remain invisible. It can be quite draining and stressful and sometimes I wonder why I’ve chosen to put myself through the whole process. That’s when I know I need to walk away!

"I’m always surprised how many times a solution comes to me when I’m away from the screen thinking of something else. I also rely heavily on my wonderful A2 Epson printer. I usually print up to 20 tests before I’m happy with the final image."

Nick feels that what makes his winning image so strong is that it's the unfamiliar familiar. "I think it’s the kind of image that’s hard to ignore on many levels," he says. "The amount of detail, the odd glimpse of the river, the on-going building works and, of course, the ‘World’ treatment which gives a new slant on a familiar view."

Nick studied Graphic Design at Camberwell College of Art where photography was an integral part of the course. He particularly enjoyed the darkroom and processing work. "When Photoshop and digital photography came along, it was like all my dreams had come true," he says. He then worked as an art director at major London Advertising agencies, working with some of the world’s top photographers and retouching studios. "I learnt a tremendous amount from them," he says, "particularly how important it is to really look very hard at things. Nowadays, instead of briefing a retouching studio to produce a hugely expensive 10 part comp, I can do it myself. Thank you, Photoshop."

Nick has now been totally freelance for over 20 years, working on everything from TV commercials to book and web design. Since leaving art school, he has always been involved in his own projects and, in recent years, photography has taken a major role in his creative life. He was recently commissioned to shoot a ‘World’ picture for a country house estate in Sussex. He is keen to shoot more images for his ‘World’ series and says there could be some exciting developments ahead.

"I’ve spent my entire career as a creative," he says. "It can be the most rewarding way to earn a living, but also one of the most stressful. When it all gets a bit much I remember, and gain strength from, the famous Woody Allen quote: 80% of success is showing up."
Nick Alcock LPA Portfolio and Profile Page
Posted by Kevin at 19:43