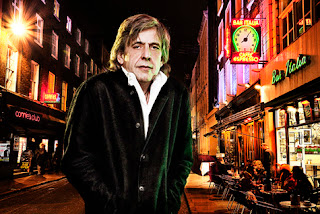 
"I've entered Let's Face It several times," he told us, "and have had images in the exhibition for the past three years. I usually enter a few images which I feel represent the best work I've done that year. This particular image was shot just days before the competition deadline closed. It couldn't have been more fresh!"


Richard told us the story behind the shoot. "I run a project called The Children of London, now in its third year. Parents can apply with an idea for a photo, I go out on location and shoot the child against a London location, put the images in the book and sell limited editions copies to raise funds for Great Ormond Street. Three copies are reserved for the Queen, the Mayor of London and the Prime Minister.


"One of the people who applied for their child to be featured was a guy called Rob Hallett. I recognised him as someone I'd photographed previously for AEG Live. He's President of International touring for AEG Live, and suggested I shoot a portrait of his son at Wembley Stadium. We became friends and, when he needed a corporate portrait, he came to me. The problem was that he is strongly associated with venues all over the world and couldn't favour one for his portrait. He wanted something creative, so we came up with idea of a night-time neon location, suggestive of the music scene without using a specific venue. Rob is a corporate individual but also a very big name in music, and friends with some of the world's biggest rock stars. It's a difficult line to tread, but we chose this kind of feel for his portrait."


Richard's shot was actually produced in two parts: the Soho background was photographed over two nights as HDR images, combining five different exposures to increase the detail in the shadows and highlights, and some retouching enhanced the background. Then Rob was photographed in Richard's studio, with studio lighting mimicking the light of the outdoor image.


"I really like the colours and detail of this image," said Richard. "Rob has become a friend of mine, and it's always interesting to photograph a friend. It's not quite as objective as with a stranger. I wanted to give him an untouchable feel, suitable for the corporate portrait of someone in his industry and position. Even if you don't know who he is, I think this image gives the impression that this is someone you should know. The pose itself is loosely based on a portrait of James Dean walking down a New York street. Relating back to iconic images sparks a level of respect in the viewer. I'm a huge movie fan, and drama is important to me. I believe pictures should tell a story."
The image was shot on Richard's trusty Canon, something which he thinks would not have been the case just a few years ago. He believes the industry has been revolutionised by the growth of digital. "I started off with a 35mm camera, as you move up the levels learning about medium and large format cameras, you tend to move to them. In fact, I shot everything in medium or large format for about 15 years, and hardly ever picked up my Canon. But, thanks to the digital revolution, it's now all come back round and I shoot almost everything with 35mm these days. It's interesting that this is happening. Previously, I would never have picked up the 35mm camera for a professional job but it's now almost the only tool I use."


Richard has been a photographer for 25 years. He specialises in portrait photography, although he gets involved in all sorts of portraiture commissions. "Successful photography is about niche," he said. "I find photographing people endlessly fascinating, whether it's for adverts, magazines or for my book. I love it all! It's nice to be able to go to both extremes of the industry."
"I didn't train or assist," he told us. "I suppose I just decided to be a photographer one day. I've photographed all over the world, everything from the biggest advertising agencies to Londoners who apply for my book, and that's the way I like it to be. You need to be a lot more versatile in the current market. Budgets are shrinking, on that basis it's been an interesting and trying time. I feel it's made me a better photographer. In retrospect, maybe things were too easy 10 years ago!"
Richard has this advice for new or aspiring photographers: "There is a lot less work around and smaller budgets when you get it. We all need to change the way we approach our work. Take a reality check: the big budgets don't exist. Don't think it's you, because it's not. It's everyone, even the biggest photographers in the world." He advises going back to basics and remembering what drew you to the industry in the first place. "Why did you become a photographer? Go back to why you started, be innovative and create other projects so you're not completely reliant on advertising and editorial clients for revenue. I still shoot both but have had to face facts and innovate."
Social media is an interesting topic for Richard. "You can hang too much importance on social media, the same as any marketing. People still deal with people, no-one will employ you because of a tweet, but there's no denying they may be interested and look at you because of a tweet. You still have to give them a feeling that you understand them. Social media is important, but don't get obsessed with it, just do it. We are on Facebook (Children of London) and Twitter (@children_of_ldn) and we also send out a regular newsletter. This is something I really recommend. We get a great response from our newsletter. My advice is to keep is short, with news articles, interesting content and regular updates. And always ask people to pass it on."
Richard now splits himself between Children of London (childrenoflondon.co.uk, now in its third year and already raised £13,000 for Great Ormond Street) and his commercial work (rbradbury.com). A personal project he recently enjoyed was a shoot of his own daughter, Millie. The 13-year-old (whose portrait featured in last year's Let's Face It) has been signed by Storm modelling agency, and Richard shot the images for her portfolio. "A good friend of mine has an estate in Somerset," he explained. "The property in middle of the forest used to be Mr Blobby's house back in the character's heyday. It's now an incredible place, a completely overgrown theme park! We were able to get some really great shots for Millie's portfolio."
Even after 25 years in the business, Richard firmly believes that enthusiasm is most important thing of all. "It's important to stay incredibly positive, and make sure you're doing this for the right reasons," he said. "Don't lose sight of why you wanted a vocation not a job, enjoy the photographs you take and be proud of what you've done."
Posted by Kevin at 18:27