Sebastian Rich - To Kill A Sniper! 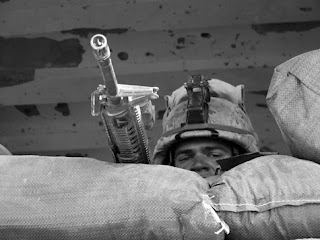 “ I could start a brand new life with all this Sebastian “ a Marine who asked to remain anonymous quipped as he and his platoon grappled with the heavy cheap plastic shopping bags containing 17. 5 million dollars worth of the world’s purest opium.

“You could win my f*****g heart and mind any day” with just one bag or even half. The same Marine said with a smile.

This was day three of “Operation Moshtarak “ translated from the Dari meaning “Together” to take the sprawling town of Marjah in Helmand Province Afghanistan. The Taliban’s very heart of banking and commerce.
The millions of dollars worth of opium we found was just one of many stashes tucked away in the kiosks and ramshackle shops that made up Marjahs central bazaar. Other units would go on to find much more. But in the meantime our platoon of Alpha 1/6 company doggedly took the haul back to forward operating base to be turned over to the Afghan equivalent of the D.E.A. The cynical amongst us would say that one might as well just put the opium back on the streets and by pass the middlemen.

A snipers high velocity round whizzed and fluttered just inches above our heads and the platoons collective ear lobes instinctively touched shoulders.
“F*****g motherf***** when is somebody going to turn that piece of s**t into pink f*****g mist “

This was the Taliban’s mopus operandi. They were never able to confront the might of the USMC head on in an old fashion battle, as they knew all to well that they would be wiped out in an instant. So they resorted in hit and run tactics. A sniper would harass for a an hour or so while other insurgents would use the opportunity to bring a few men closer to the Marines firing RPG’s (Rocket propelled grenades)
But today we had a sniper “ who could shoot” as our Gunny would say. This sniper had killed a young Marine just the day before with a single round straight thru the centre of his head. I had filmed the young Marine being taken off the battlefield by corpsman and was well aware of the danger from this particular individual. Normally we never took much notice of the so-called snipers as they were crap shots and just sprayed their Kalashnikovs vaguely in our direction just to let us know they had not gone away. But this guy was a different matter all together and to be taken seriously.

I watched as the Marines poured huge amounts of firepower down on our sniper. First an air strike was called in. Two Cobra attack helicopters firing a total of four hellfire missiles at 68.000 dollars each and hundreds of rounds of 20mm shells from its M197 three barreled Gatling guns ripped into the snipers coordinates. But just a few minutes later he was up and running again mocking us with his gunfire. Another air strike. Two fixed wing aircraft with a five hundred pound J damn bomb costing 70.000 dollars apiece literally vaporized the earth and buildings that were the snipers reported position. Unbelievably shots once again came from the dust and mayhem. He somehow defied all logic and survived this unbelievable onslaught.

Our “Gunny” had had enough of this “bullshit” and put together a squad armed with a Javelin missile to end this guy’s run of ridiculous luck and temerity.

Fifteen Marines and I ran into open ground with suppressing fire for the missile operator just a couple of hundred meters from our sniper’s position. Two bullets smacked into the ground between myself and the “gunny” We quickly exchanged a rather odd glance at each other. I noticed all the while that the “Gunny was still sipping from his coffee flask as cool as you like. “In your own time “ roared “gunny” at the young corporal with 80.000 dollars worth of javelin missile perched on his shoulder. Bullets from another direction were cutting into the ground to the right hand side of us. More insurgents had joined the fray. With a huge dust erupting whoosh of flame the Javelin missile roared away from its slightly startled operator. The missile armed and deadly accurate slammed into the snipers position in a ball of angry flame spitting earth and assorted debris high into the air. Finally silence, well at least from that direction.

We all ran into the relative safety of a nearby compound firing as we went. Gunny counted us all into the compound and poured praise on the missile operator and the rest of the Marines. I pushed my camera into his face to be met with. “Mr. Newsman get that thing out of my face I don’t look good on Thursdays “ !! I was a little bemused, as it was Tuesday! As the days rolled on I was to learn that every day was not a Thursday even if it WAS Thursday. I had never come across this way of being told to get my camera out of someone’s face like this before. After over thirty years in this crazy business I appreciated the originality.

Every one grinned an adrenaline infused smile at each other and one by one we sunk to the dirty earthen floor of the compound gulping huge amounts of water. A mission successfully carried out and no casualties. The cost of killing one Taliban sniper (excluding an unknown amount of bullets) $492.000 dollars before tax.